Day 2 Rishikesh, India – Seek and You Shall Find 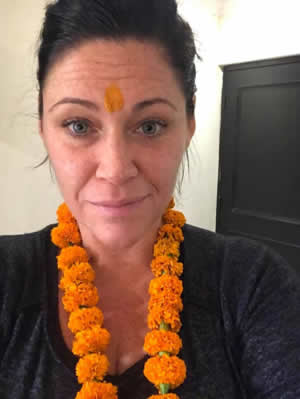 I hope you read “Running Scared” about my first day here in India. If you did you would know I was missing some essential items. I needed to get a few of these items to make me “happy”. I needed these to allow myself to get my head on straight and hopefully start sinking into this experience. Amazing how a few items can turn your frown upside down. Any idea what was on the list? Lets see if you guessed any of these. A set of sheets, flip flops, a cup, a towel and clean water. By the way, I brought my own pillow. Yes, smart, I know! Interesting that all of these items are a luxury for most of the people that live in India, and all over the world too. Before this situation I truly didn’t understand this point. Americans, and many others, have no freaking idea what they have and how lucky they truly are. None. This included me.

I stood in the archway of the hotel lobby exit facing the street. I took in a deep breath before stepping out into this new world of mine. I knew what was on the other side of those doors and quite honestly it scared the shit out of me. I stepped out into the 90 degree heat and took a right on the main road. I was immediately greeted with honking. Continuous honking. Day, night, morning, whenever. At first I thought it was in an aggressive way, the way we use a horn in the states, aggressive and pissed. From what I can understand it’s more of a courtesy to say “Hey, I’m coming up along side of you.” If you happen to be walking on the side of the road you will also get a friendly honk saying, “Don’t walk in the road because I’m coming up behind you and I’ll run you over,” in a nice way, sort of. Every – single – car does this. It’s literally 20 times worse than New York City. After the initial first few heart attaches you start to get used to it and interestingly enough find yourself depending on it.

I took another right and headed down a long alleyway. This is where my new German friend Connie and I walked yesterday. I was by myself now so I thought I should stick to something somewhat familiar. All throughout the city you will travel by alleyways. Most of the alleyways are about 5 feet wide. This doesn’t stop the motorized scooters from speeding down them. They have even added makeshift speed bumps to stop them from going too fast. If you forget they use these pathways at any time you will get a reminder “I’m coming and I don’t want to run you over beeeeep.”

Unfortunately the streets and alleyways are very dirty. Trash lines the streets and sidewalks. It’s very unfortunate because the holy and preciousness of the city can immediately be lost on newcomers, AKA me, because of these sites. Cow and dog dung is everywhere. You have to watch every step you take because it seems to be strategically placed, which is about every 20 feet. I type this while laughing to myself because we’ve already had one tragedy. Did you know that cows are holy in India? They’re considered the goddess mother because they provide milk which in-turn equals life. This makes most of the country vegetarian.

I made my way down the long stretched out hill, winding, swerving and dodging the whole way. I found my way out to the main city street. It was 8:30AM and shop owners were just starting to arrive to open their stores for the day. It’s a very weird, slightly uncomfortable, feeling being a westerner woman here. People stare at you, gawk is probably a better term. It definitely takes some getting used to. I noticed another westerner woman who was walking by herself headed towards me. She held her head very high, almost in a snooty sort of way. I wondered if she did this to hold a presence. She could be scared shitless right now but you would never know because of the way she was presenting herself. Noted! I felt myself stand up a little taller. In a situation like this where you’re being gawked at it’s sometimes instinct to shrivel up, at least for me. If you haven’t read “The Fat Girl Took Too Long” on my blog, go check it out @ YourJoyQuest.com. It will explain everything.

After wandering in and out of stores for 30 minutes I started to realize there was no way I was finding sheets. Seriously? I really thought I would find sheets here!? Duh. Then thank goodness my quilters mind kicked in. “Fabric! I can find fabric here,” I said to myself. There are so many beautiful tapestries and quilted fabrics being sold on the sidewalks here. Any color and size you’d like. There had to be a spot that sold raw material. I got up some courage and asked a nice looking women on the street where fabric could be found. Thankfully she pointed me in the right direction. Finally, fabric, AKA sheets! I very uncomfortably negotiated the price down slightly and made a purchase of 450 Rupee, or $6.30. Nice! Sheets, check.

Right next door, I was able to buy a pair of “indoors flip flops” for 100 Rupee or $1.40. I learned rather quickly that when I was returning from these adventures I was bringing in my “outdoors flip flops” into my new living space. Remember what I explained to you about the streets!? I didn’t want to be tracking that into my new palace.

Two items down, three to go.

I headed back toward the hotel knowing there was a convenience store next door to the hotel. I bought two 5 liter jugs of water at 120 rupee, or $1.68. Interesting that water costs more than flip flops….hmmm. I hauled them into my hotel and went to the lobby desk to ask for a towel. He went back to find one and came back out to discuss something with the man behind the desk I was curious what they were discussing but I was not able to understand because they were speaking hindi. He went back into the room and I could hear crumpling like a bag of chips being opened. He came out and handed it to me. Gold mine! It was a brand new towel! I was so happy. That must have been what they were discussing, could he open the new package of towels. Yes!

I headed up to my room with all of my morning finds and there, next to my room, was a tray with two clean glasses on it. It was like they were sitting there waiting for my return. I snagged one bringing it into my room. 5 of 5 items complete! I was SO happy. The amount of joy that clean sheets, flip flops, a cup, a towel and clean water could bring to this woman was incredible! It’s a new day, maybe I can do this? Right there I decided I would try to stick out this adventure. I would give it a shot and see if I could make it through. The yoga study hasn’t even started yet so “running scared” now seems a little premature.